Written by Luis, Beau, and Alfredo

The article “Fox News Under FBI Counterintelligence Investigation” comes from the website domain Patribotics. This website domain/blog was founded by Louise Mensch in January 2017 for the purpose of sharing sensitive information that could be based on high profile sources with insider knowledge. Patriotics only posts articles every few days; unlike other news sources, they are not a day to day basis type of news,  their main focus is set on politics in the U.S. The article in question is about Fox News being under a FBI counterintelligence investigation is based on claims from unknown sources that Fox has co-ordinated with the Kremlin in broadcasting political propaganda in the United States. (Patribotics)

Patribotics provides information that Fox News is under FBI counterintelligence with the use of unidentified sources that make substantial claims that should be easily verified, the length of the article itself  and short conclusory opinion statements that repeat what was previously said in the article, which based on Melissa Zimdars criteria, makes the reader question the credibility of this article. The website itself has only been around for 11 months, meaning it still lacks the history to have proven itself a trustworthy news source based on past articles. Especially when considering that many of its articles are seen as being based around theoretical and unsubstantiated statements, therefore creating the image of “fake news.” This provides the audience a misunderstanding of a topic that misleads you with unreliable sources. Patribotics is seen as a fake news/conspiracy theory news by red flags that get raised when reading their articles, the use of unidentified sourcers, short conclusory opinion statements, and to prove a negative which is impossible.

Vanessa Otero, creator of the viral chart in which various major news sources were categorized in a manner to imply if they are fake, bias, conspiracy, etc, uses a strategy to define whether an article is based on conspiracy. Otero uses the “top six red flags”(pictured below) strategy to determine if the article is conspiracy based. 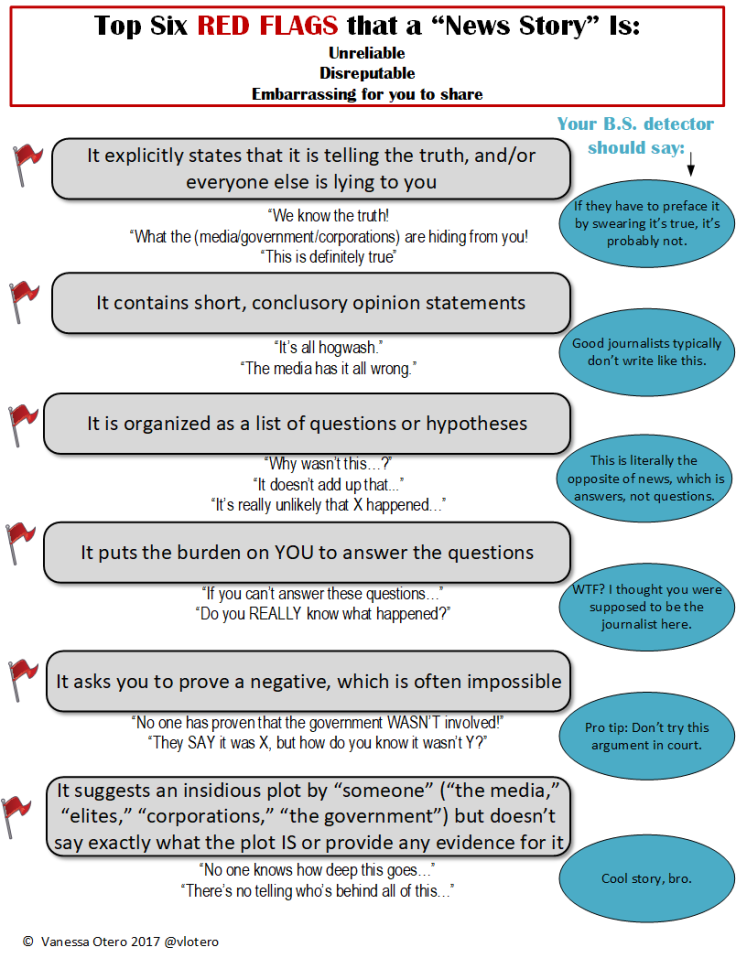 Through examination of the article, it is obvious that the Patribotics article uses some of the flags indicating that it is an article based on conspiracy. Otero explains that it can be difficult to make accusations if news is conspiracy or not, but what can help is looking at patterns in an article that are able to point out the top six red flags, therefore signifying that the article can be conspiracy based.

Although the article does not give into some of the red flags Otero suggest that can make an article conspiracy based, there is still some red flags that indicate it can be a conspiracy based article to a certain point. One of the red flags signaled in the article is that of “it asks to prove a negative which is often impossible,”(#5) which explains how they want the reader to prove something impossible. Flag number 5 can be seen in some parts of the article, for example throughout the article, it is clear that many unproven assumptions are made that can cause the reader to want to determine whether they are true or not. In the article, Patribotics states, “Specifically, Sean Hannity is on signals intelligence co-ordinating his pro-Trump message with organs of the Russian state, such as RT, Sputnik, Wikileaks and Julian Assange. However, emails coordinating messaging with registered agents of the Russian state are said to exist from more shows than that of Sean Hannity,”( Patribotics)  the quote leaves many questions to be answered. How do we know Sean Hannity is communicating with Russian sources? Why is he doing it exactly? What emails are presented that can prove this assumption against Sean Hannity? The author does not present any clarification as to how the assumption can be proven causing for confusion among the readers whether it can be proven or not, therefore signaling a red flag number 5.

Another red flag that this article raises is “it suggests an insidious plot by “someone” (“the media,” “elites,” “corporations,” “the government”) but doesn’t say exactly what the plot is or provide any evidence for it” #6 Throughout the article Patribotics has this claim of the Fox News being under FBI counterintelligence but never gives or cites a form of evidence, all it says is “these sources say” which raises questions on who says these things and if these facts are true even though we don’t know where they came from.

Melissa Zimdars uses the term “Red Herring” to describe news as being something that can mislead or distract the readers from valuable news. The term can be laid upon Patribotics article “Fox News Under FBI Counterintelligence Investigation” because of the theoretical assumptions that it makes , this causes it to be categorized as “fake news” which can mislead in a way where people will believe it is true, and people view this news rather focus on what news that is actually taking place . Controversy does indeed sell, and if articles like these keep making unsubstantiated assumptions based on unverified sources, real factual news will be put on the side lines and ignored by people who read articles based solely on their headlines. Another area of speculation is how Patribotics uses a blog form of expression in their website making it a more reasonable to believe it can be opinionated rather than a real news source according to Zimdars.

The simple fact of being sponsored by a foreign government isn’t enough to cause FARA to be invoked, To have FARA enforced and applied to an organization or person, it must be on the payroll of a foreign government and be actively carrying out a foreign powers political agenda while in the United States of America. To illustrate this point, here are some examples; there are plenty of non-American news outlets operating in the U.S now, that have not been asked to register with FARA; like the BBC, the Economist, Reuters and the guardian. these are also amongst the most trusted news sources by Vanessa Otero, as seen in the image, and in large part respected as trustworthy news sites by the American people. 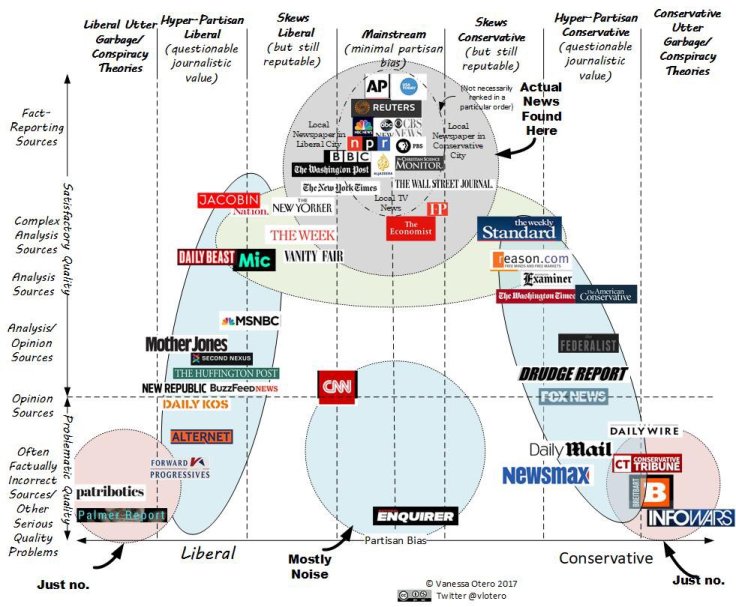 Business Insider gives some type of clarification for Patribotics on the topic of Fox News being under FBI investigation for Russian propaganda and operating in the United States and violating the Foreign Agents Registration Act (FARA). Business Insider quotes Yahoo news for a more reliable source and gives the audience extracts from an interview on Andrew Feinberg. Asha Rangappa an FBI counterintelligence agent talked about how “journalist” aren’t seen as producing independent news but they are foreign agents taking direction from a foreign power which are the Kremlin, which violates the FARA. (Business Insider)

Even if Fox News were to be deemed a foreign agent by the committee that oversees FARA, it is highly unlikely that its broadcasting licenses would be revoked because of it, as Harold Feld, senior vice president at DC-based digital rights group Public Knowledge said in late 2017 “as a practical matter it’s impossible because the standard – to revoke FCC licenses-is ridiculously high, you basically have to kill someone or be a child sex predator to lose your broadcast license.”(FARA) As a precedent we can look at Russian mouthpiece RT, in October 2017 the Department of Justice requested the network register itself under FARA, though they have not yet complied, their broadcasting licenses have yet to be questioned by government officials.

Although the FARA act requires agents of foreign governments to declare themselves to Justice Department, in no way does it curtail the freedom of speech granted by the first amendment. Fox News would still be able to freely propagate “pro-Russia” and “Anti-American” news, having to register with the Foreign Agents Registration Act would only force Fox News to periodically state that it is sponsored by the Russian government and to disclose financial information. Even if Fox News were to retroactively declare itself an agent of a foreign government, it is highly unlikely that their broadcasting license would be pulled by the FCC.  As commissioner of the FCC Jessica Rosenworcel said in 2017 “It’s essential that the FCC in all that it does is careful to abide by the First Amendment when it engages in any kinds of policies engaging broadcast licensees.” (FARA)

The FBI is investigating possible Russian meddling in the 2016 presidential election, though, this has little to do with Fox News specifically. It is worth noting that other news organizations and multiple individuals have been asked to register with FARA. A healthy portion of the people being investigated for connections to Russia have ties to the Trump campaign, several of his campaign advisors and a few of his family members have been indicted.

Fake news can be incredibly pervasive to society at large and can cause a great deal of strife and if it goes unchecked can have incredible amount of power and influence over the uninformed masses. It is for this reason that a great many people signal fake news as one of the major contributing factors that got Donald Trump elected as president of the country and into the white house. The purpose of this article is not just to be case study to showcase and expose a fake news article, it is to awaken a consciousness, to awaken the critical thinker that lay dormant inside all of us, to cast aside the shackles of self-imposed ignorance and get the average Joe to question what he hears from a friend, sees on television or reads in an online article. It is necessary that we learn from our mistakes to not let history repeat itself #NeverAgain #Resist #FakeNews.